The decoration of buildings with natural stone is considered prestigious. The material is durable, and is often used repeatedly. The stone cover looks attractive, reliably protects the walls from damage.

During the crystallization of magma at depths under high pressure, basalts and granites are formed. The basalt layer, characterized by an alkaline reaction, is deeper in the earth’s crust. But individual deposits come to the surface on almost all continents. The largest quantities of basalt are mined in Canada, Ethiopia, Eastern Siberia, Armenia. Its density is the maximum among natural building materials – 2600-3100 kg / m3. In the composition of 47-52% of silicon oxide, and about 15% of aluminum oxide.

The colour spectrum of basalt is limited. Gray, black and green shades predominate. Green varieties are formed with prolonged exposure to geothermal water, and are valued above gray-black. Basalt tiles are characterized by maximum resistance to wear. It is used to cover the floor in public places, also on the walls of metro stations and train stations.

Sour granite is more diverse. The silica content is higher, usually within 68-73%. Density reaches 2600 kg / m3. Granite deposits are widespread in the world. In construction, a stone is mined nearby, given the considerable costs of transportation.

In fact, granite is an eye-visible mixture of individual minerals: white quartz, gray or reddish feldspar, almost transparent mica. Less common is a precious stone of black colour, with a little expressed granular structure. The most beautiful varieties are used for facing of elite buildings and monuments. The main application is the external lining of public places, monuments, architectural compositions. From the sawn stone make a durable stone blocks and slabs for stairs. Roughly processed is used in the masonry of decorative and retaining walls.

Granite and basalt of finishing quality are relatively expensive materials, they are difficult to work with. But their advantages outweigh:

It is not recommended to coat residential buildings with granite or basalt, since they have natural radioactivity, radon gas is gradually released. 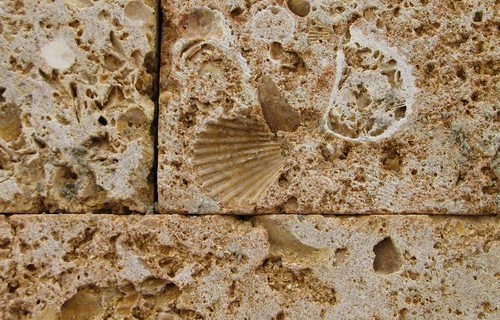 Limestone is a sedimentary rock that was formed during caking and partial recrystallization of chalk. Under the microscope, the elements of the shells of marine organisms are still partially distinguishable. Shell rock is found almost everywhere, under layers of sand and clay at a depth of tens of meters. On the surface comes out in the mountain peaks of the Alps and the Crimea.

The density of limestone is not more than 2500 kg / m3. Stone is characterized by high porosity – up to 25%. Moisture resistance and frost resistance is low, the durability of the open masonry does not exceed 150 years. The soft enough loose material is easily handled. Near the mining sites affordable and cheap limestone is widely used in the form of building blocks, but with additional cladding with more resistant building materials. 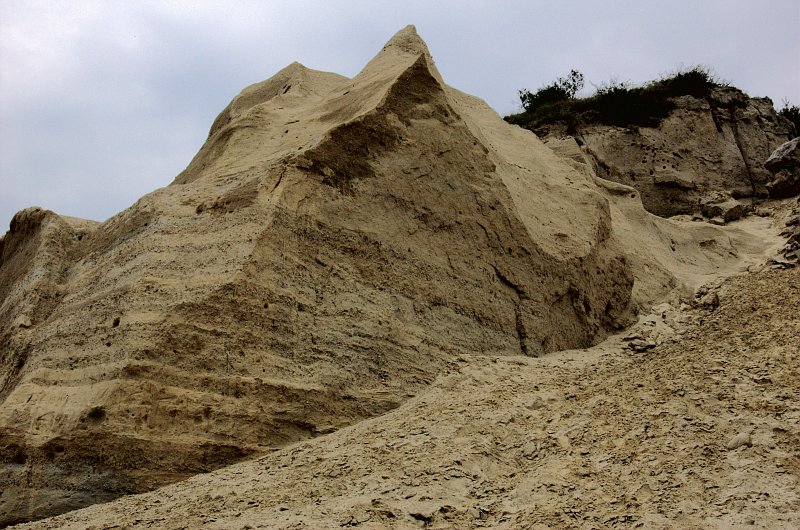 Sandstone is a cindery sand, the grains of which are bound by mineral cement. The density of the mineral is between 2200-2700 kg / m3, the porosity reaches 0.7%. Absorption of water varies from 0.6% to 6%, depending on the variety. The best physical and chemical properties show quartz sandstone, with a silica content of more than 90%. Aluminum oxide deteriorates the building characteristics. Carbonate limestone sandstone still withstands loads.

With a predominance of quartz, the colour is almost white, iron oxides contribute yellow, red and brown tones to the coloration. Despite the natural beauty it is not recommended to use sandstone for finishing. The stone quickly collapses under the influence of the sun, wind, moisture and frost. But from this stone high-quality building blocks under the facing for buildings in 1-2 floors are obtained.

For interior finishing, rocks that are unstable outdoors, or of great value, are used. But granite and basalt tiles are used both for exterior and internal cladding. 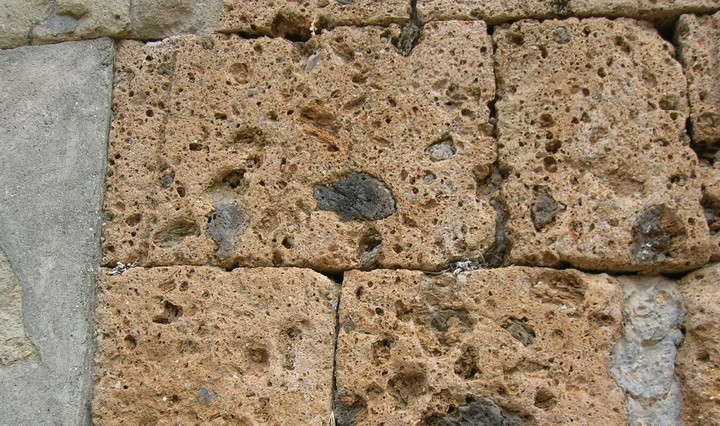 It is formed during eruptions of volcanoes on the surface of the earth. Density of the mineral from 800 to 2000 kg / m3, the structure is heterogeneous. Large quantities are mined in Italy, Armenia, Iceland, Cape Verde.

Volcanic tuff happens almost any colouring due to impurities. A naturally occurring white, gray or brown stone saturated with pores is a pumice stone. Dense low porosity grades are better suited for facing rooms. Among them there are red, green, blue and variegated.

Even dense tuff is relatively soft, it is easy to saw. Due to the simplicity of the processing it is widely used on the Apennine peninsula for the construction of low-rise buildings. In some countries the stone is imported, so it is used in elite finishing. 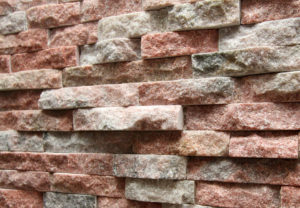 Quartzite refers to metamorphic rocks. It is formed from quartz sandstone under the influence of high pressures and temperatures. The average specific gravity is 2600 kg / m3. The main deposits are in the United States, Africa, Russia, and Eastern Europe. The extraction is conducted in an open way, which makes the cost of production cheaper. But quartzite of building quality is rare.

A set of small colours are: light gray tones, sometimes with yellow-brown impregnations of iron oxides. Due to the high content of quartz (up to 90%), the mineral is chemically resistant, withstands heating up to 1770ºC and constant exposure to moisture. Stone devoid of natural radioactivity has a wide range of applications in residential buildings. The durability of the quartz finish reaches 150-300 years. Baths, saunas, swimming pools are trimmed with treated slabs. 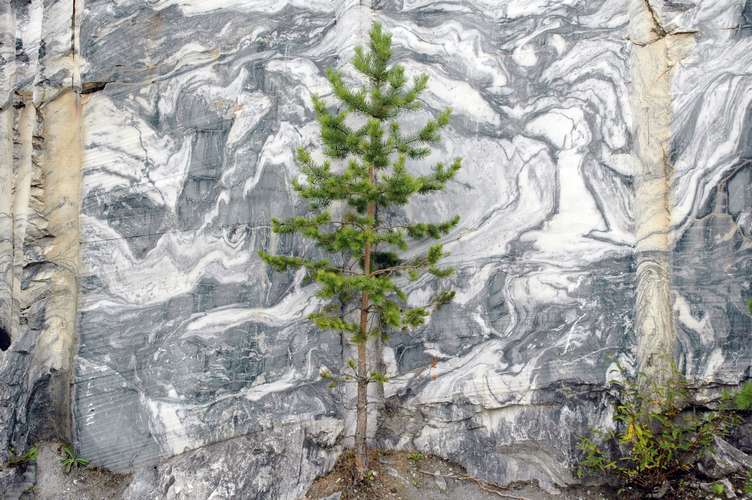 Marble is formed by metamorphosis of limestone. There are two varieties – almost pure calcite, and dolomite with a high content of magnesium. Specific gravity is 2300-2600 kg / m3. Stone is distributed in the Mediterranean, the Urals, China and Brazil. Up to 70% of world production falls on three countries: Spain, Italy and Greece.

The colour is diverse due to the impregnation of oxides of transition metals. There are blue and green shades, which is not characteristic for other breeds. Black marble is considered the most rare and valuable. It is not difficult to choose colour to make a multicoloured mosaic.

Small elements of marble of regular shape are made inexpensively. Soft stone is easily processed. The production of large flat plates is limited only by the size of the blocks that occur in nature. With all the advantages, marble has serious drawbacks.

Traditionally, marble is used in the construction of massive structures, columns, for exterior decoration. This application is not justified even in a warm dry climate given the increased weathering. Inside, the marble finish is much more durable. Marble walls, floors, and bathrooms are made. But precautions are required: use only soft tools and non-aggressive detergents for cleaning. At the same time, marble can be easily restored when polished. 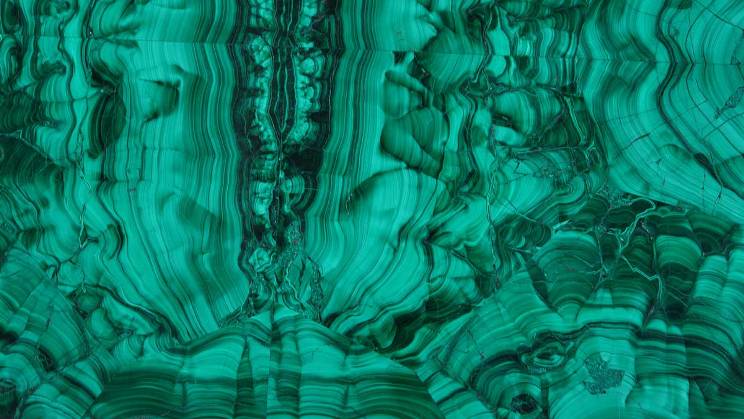 It is a beautiful green mineral. A characteristic colour is given to it by a high copper content. Due to the metal, the copper carbonate is heavy – the specific gravity is in the range 3700-4100 kg / m3. The main prey is concentrated in the African mountains (Congo). Small amounts of high quality stone remained in the Urals and Altai.

After the separation of semiprecious ornamental malachite remains a material with a fibrous structure, suitable for interior decoration of premises including wet, like bathrooms, except areas with regular direct water access (swimming pools, showers) places.

The surface of malachite is characterized by patterns in the form of undulating lines and closed circles. The colour of the different sections varies from light green to almost black.